How the Designer Lives: Sidika Owen 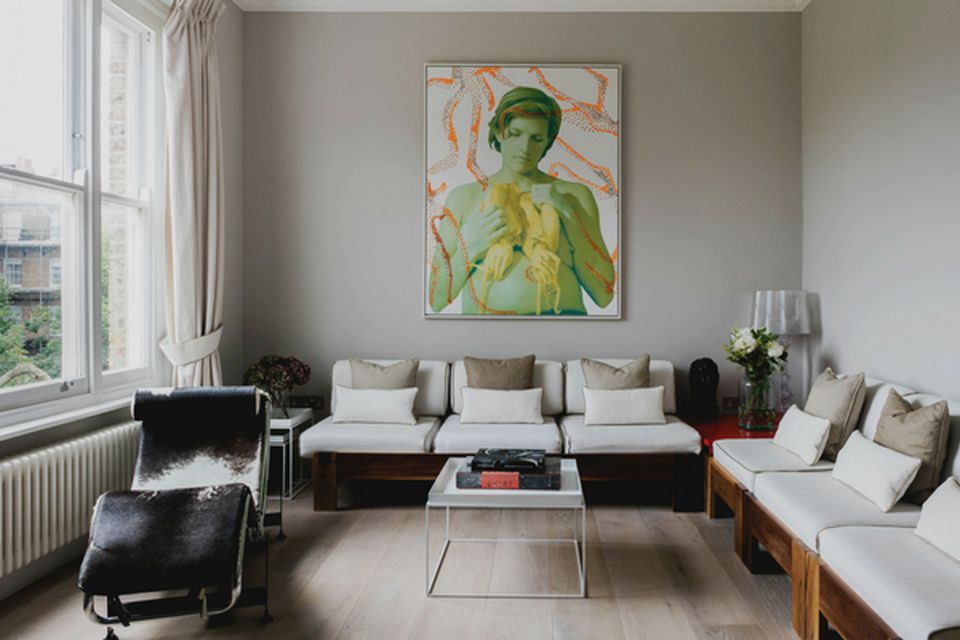 Inspired by a childhood on the Cote d’Azur, her Turkish and Nordic roots, and her work as an artist, Homewings Designer Sidika Owen shows us around the private spaces of her Little Venice home.

With degrees in Economics and Fine Arts, Sidika spent years as a banker in the luxury goods sector whilst continuing to create and show her art on the side. “I think the turning point for me was when we worked with and financed Tom Dixon and India Mahdavi” - two major names in the interior design world. I gained some insight into this sector and felt a real calling" she says.

At the same time her husband and she had just bought their first London home and because they were both working long hours, Sidika set about finding an Interior Designer to help realise her dream space. “I finally settled on an interior design company called Conley&Co based in Dulwich” she says, “and I worked closely with them to bring my vision to life”. Enjoying this collaboration so much, she and the designer continued to work together on other projects and Sidika began night school for an interior design degree at the Chelsea School of Arts. 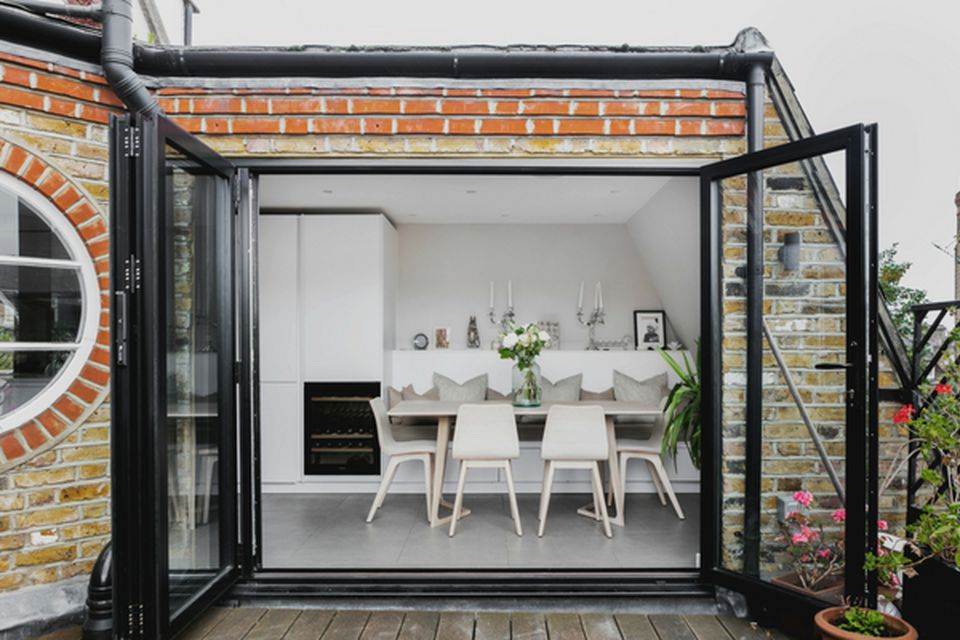 Attracted first by the wide avenues, tree-lined streets and canals of Little Venice in Maida Vale, they realised that the area was also perfect for the schools they were interested in for their young son and daughter. “Our home is a three bedroom Victorian conversion with a large terrace. “In fact” she admits, “I made an offer on this house without my husband even seeing it! I knew one must act fast in London and I guess I justified this because, well –maybe it’s the artist in me - I just fell in love with the space!” 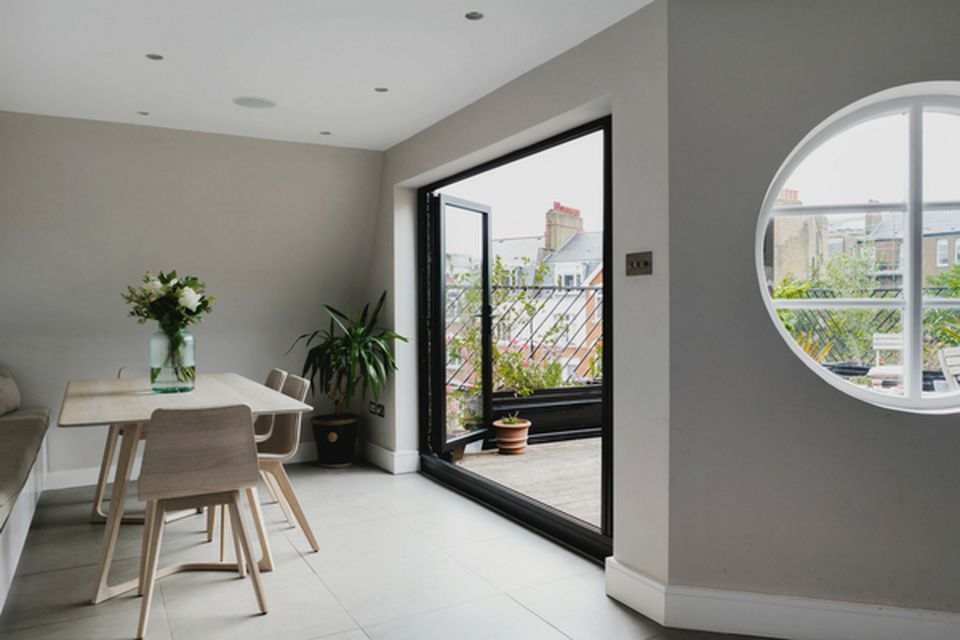 An artist by training as well as a designer, it’s clear that Sidika puts art at the forefront of her personal style. “My mother owned an estate agency for luxury villas in the South of France, which meant that I was constantly visiting gorgeous properties as a child. I would often go to local “brocantes”, or car boot sales in the little French villages where we lived, taking in the beautiful scenery as we searched for treasures.” In addition to this, my paternal grandmother lives in Germany, very close to the Danish border and I spent a big part of my childhood visiting her and spending time in this part of Europe – the Scandinavian design and style was a huge influence on me from a young age.” 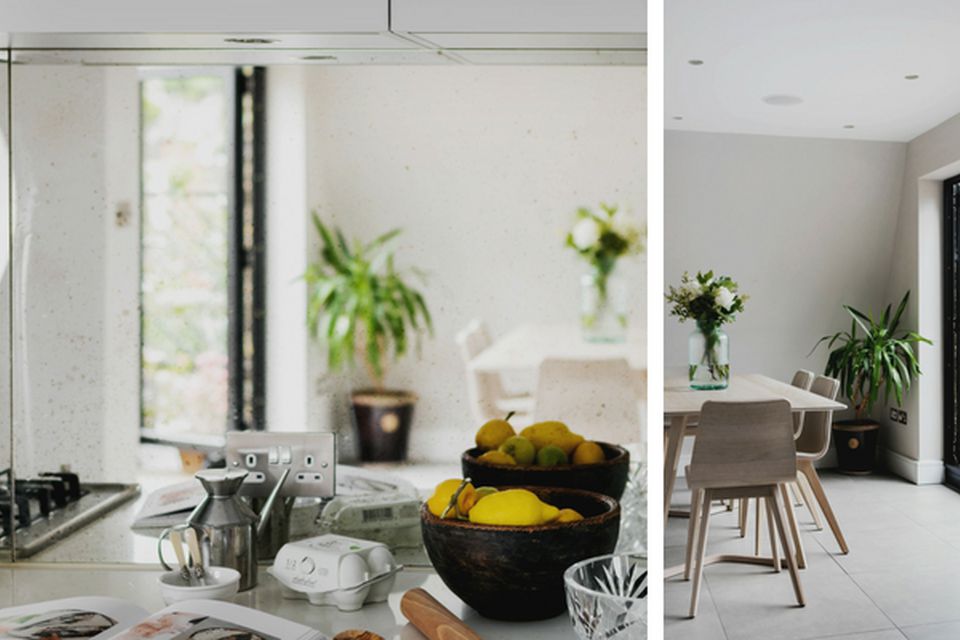 With a Turkish mother and an English father, Sidika relishes the diverse influences of her heritage as well. “When you travel a lot to beautiful countries with rich cultures like Turkey, you can’t help but be inspired artistically”. This is clear by the eclectic style she brings to her home. 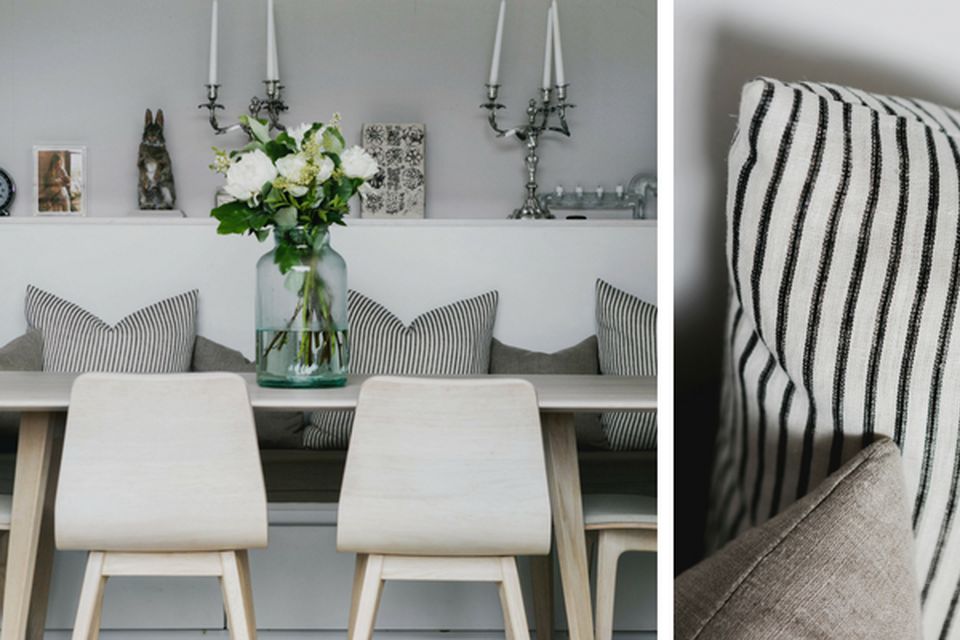 With many lovely features in her house, it’s a challenge for her to pinpoint a space or feature she loves most. “I supposed my favourite element in our house is, quite bizarrely my least favourite” she explains. “I love that there are so many windows everywhere and it’s extremely light, but that also means that I can’t put as much of my art on the walls - there’s just not the wall space!” The only upside to this of course is that it forces her to rotate pieces and appreciate each piece of art more as a centrepiece. As for the art on display at the moment, a canvas print of a pregnant Madonna with giant squids on her belly takes centre stage. An original Sidika Owen creation, she chose a pendant that resembles a halo above the Madonna’s head made of LED lights that shines like crystal. Divinely eclectic, indeed. 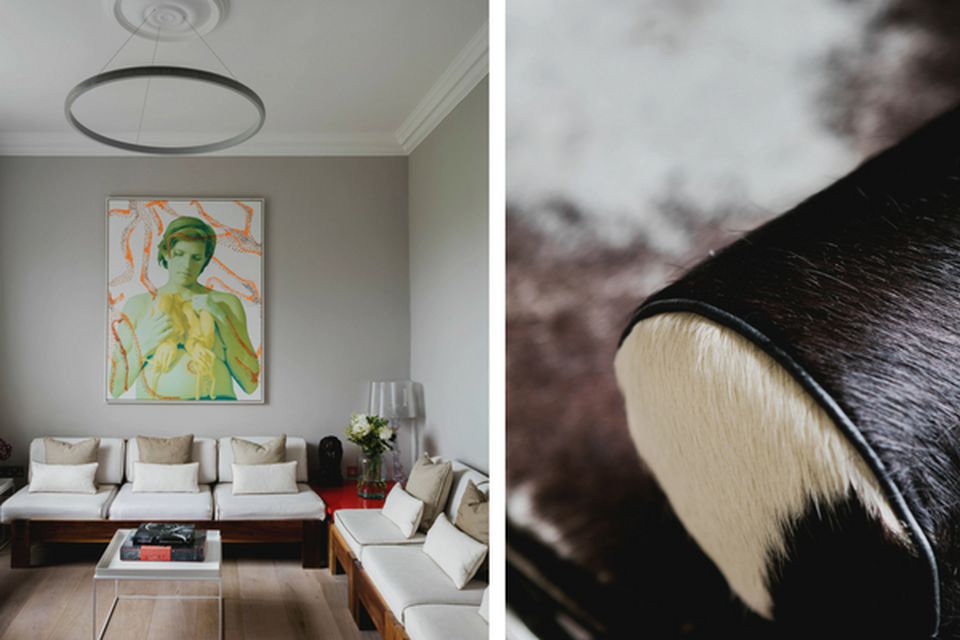 When asked about the challenges of working in the field, Sidika is frank: “Oh, where do I start?!” she muses. “Interior design is very different from what I thought it would be.” Having worked in the tough environment of investment banking for fifteen years, she’s certainly no stranger to a stressful workday. “The challenge with interiors is to communicate your creative ideas to the client and vice versa. It can be difficult to communicate visually and sometimes the clients don’t really know what they want; it’s a process as you have to educate and guide them a lot and sometimes take them outside their comfort zone!” It’s a process from a visual and logistical point of view, with a further challenge of sourcing and accurately costing. Finally she admits that perhaps the biggest challenge is that “it’s emotional” because it’s her clients’ personal space as well. “It’s not like buying a dress, which you wear for a night - it’s more intimate and something that will be experienced by the client every day, so you’ve got to get it perfect.” 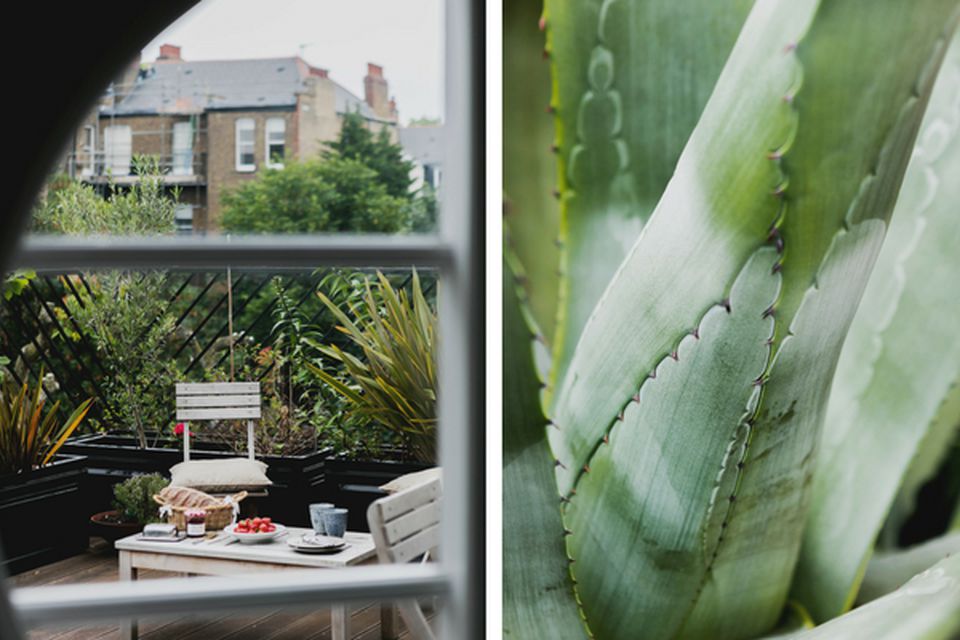 It’s clear that as an interior designer one must wear many hats. Sharing a few more anecdotes, Sidika emphasises the huge personal rewards from seeing the impact that the final result has on clients. “It’s extremely rewarding in the end when you see them experience the joy of their new space” she says. 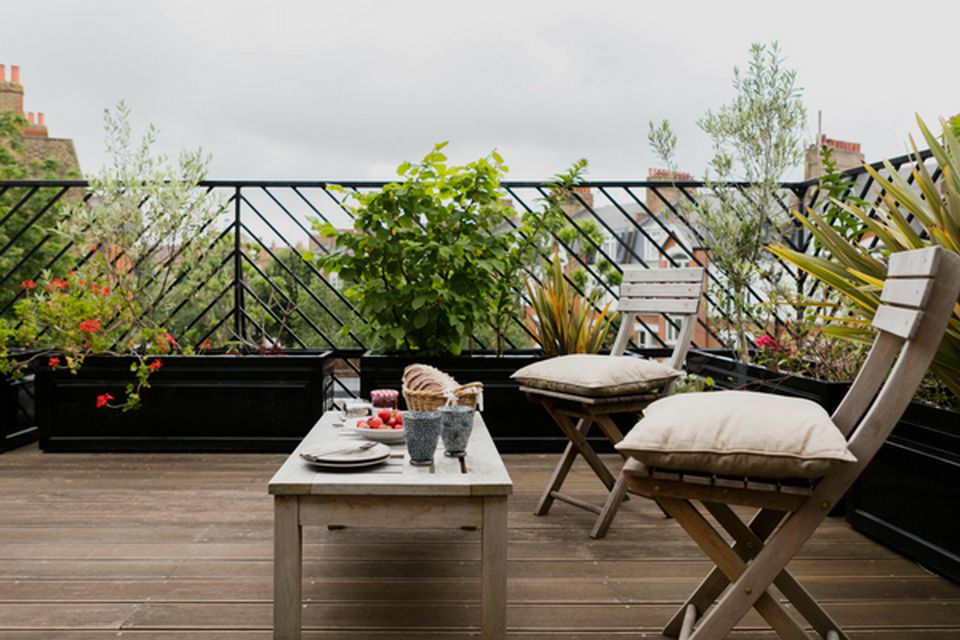 Returning to the topic of her own home, she shares the fact that her friends were mostly shocked with the change from ‘before’ to ‘after’ when she had finished her interior work. “My friends told me they loved the serenity of what I’d done to the place.” Due to the neutral greys, the feel of the flat is very serene and that’s clearly what people are drawn to. “Our house is a bit of a showroom I’ve realised” she says with a cheerful laugh “as friends have now given me some great referrals! My husband and children might not like it that much because messiness is just not an option anymore!” 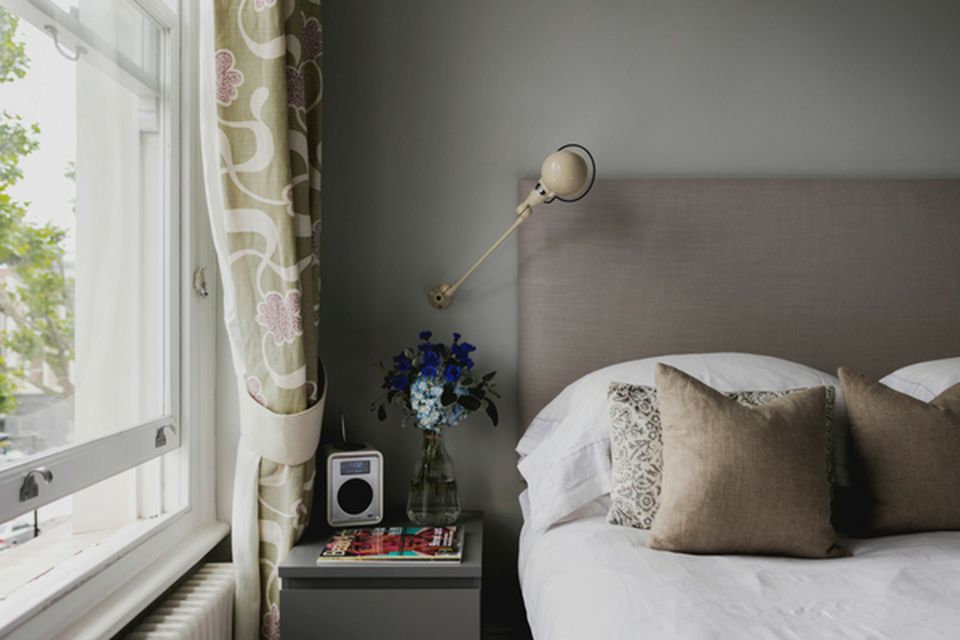 As personal touches go, Sidika has not shied away from making her mark. “There was a gorgeous dress that a friend of mine gave to my daughter when she was a baby, and I wanted to do something special with it. I found a distressed frame, framed it and put it on her wall.” Displaying something meaningful in such a beautiful way that would otherwise be gathering dust has clearly brought joy to her and her daughter. 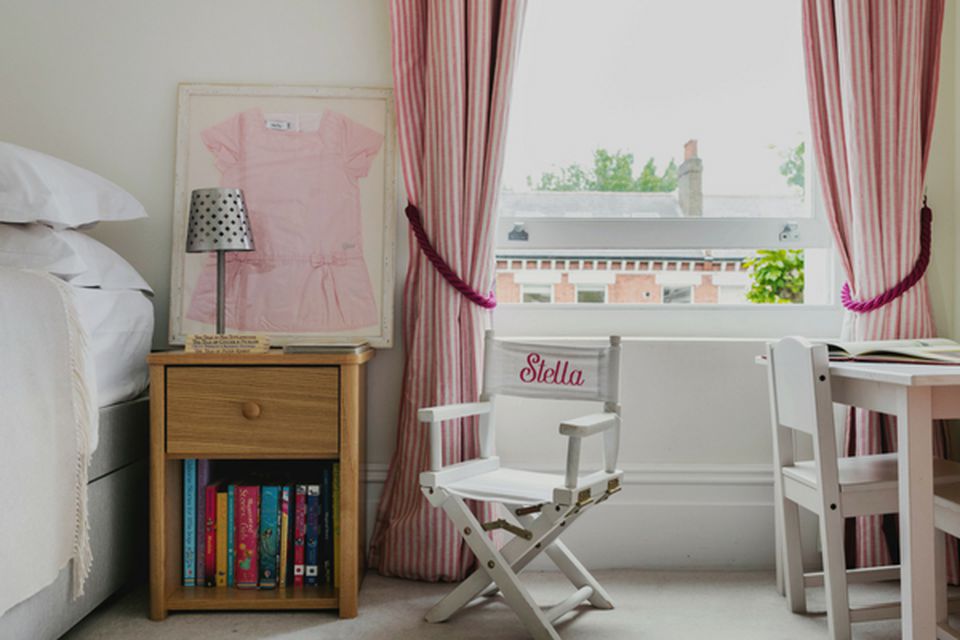 “Another nice personal touch I made was - when you come into the house you’ll see a lovely console table which originally had a fantastic shape but awful paint job. So I set out to restore it - I think they call it gilding. It wasn’t very difficult, but of course you never know how it will come out. I chose a matte gold, which turned out even more beautiful than I’d imagined, so I’m quite proud of that” she says. 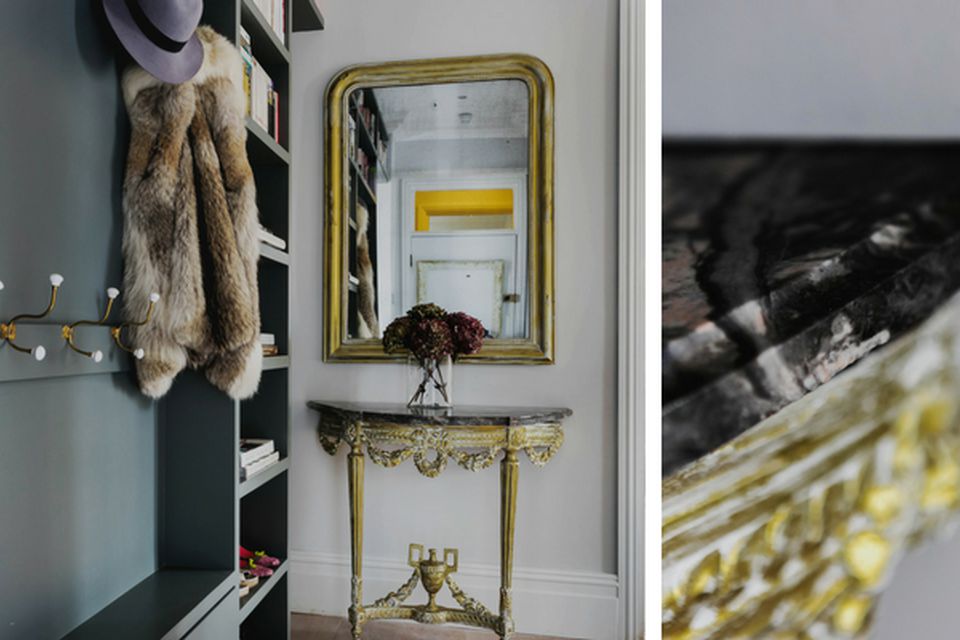 As for areas where she and her husband decided to indulge, Sidika insists that a durable kitchen with strong materials, solid worktops, good appliances and cabinetry was essential for them. It was important, she says, to spend a bit more time thinking about a highly functional and durable kitchen, and this is something Sidika regularly recommends to her clients as well. “The kitchen is the heart of the home so it’s important to do it well, whereby there are other areas that you can do a lot with on a smaller budget”. 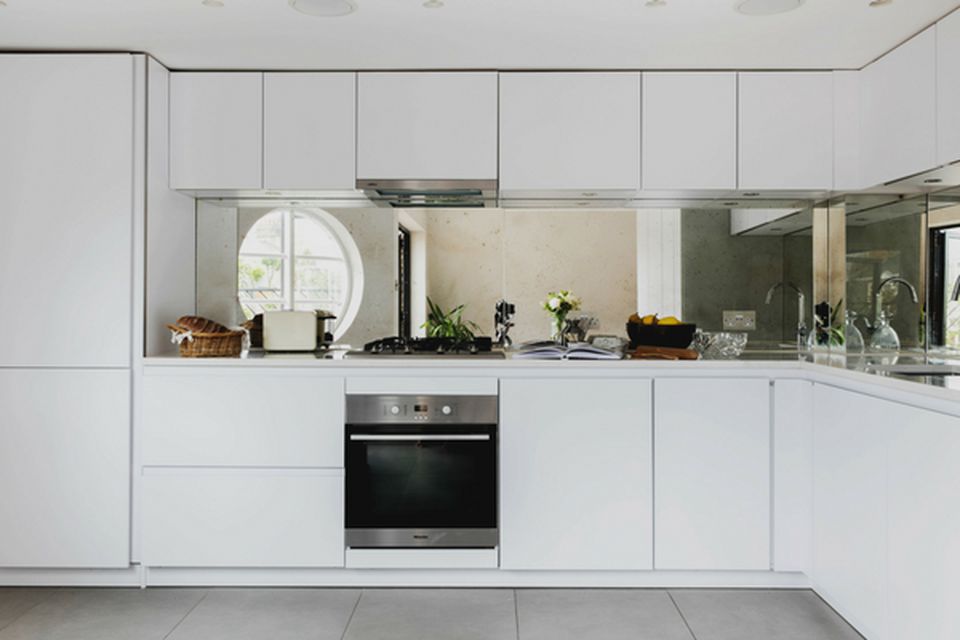 Sidika readily admits that for her, living in spaces that feel ‘right’ are central to a healthy life and lifestyle. “It’s a luxury in the sense that you don’t really need it to survive, but it’s not a luxury in the sense that it leaves a strong positive feeling of peace, shelter and beauty.” Though she clearly has the artists eye, it’s interesting to note that before she underwent her own interiors training, she hired an interior designer for her own home. “Before I did my training I realised it was easy to make expensive mistakes and for the process to drag on and on as I had such a limited amount of time to dedicate to it. I wanted to work with someone who had industry knowledge to understand what works and what doesn’t and who knew where to source things and which material to use - designers know all about this and it was certainly life-changing for me to work with one.” 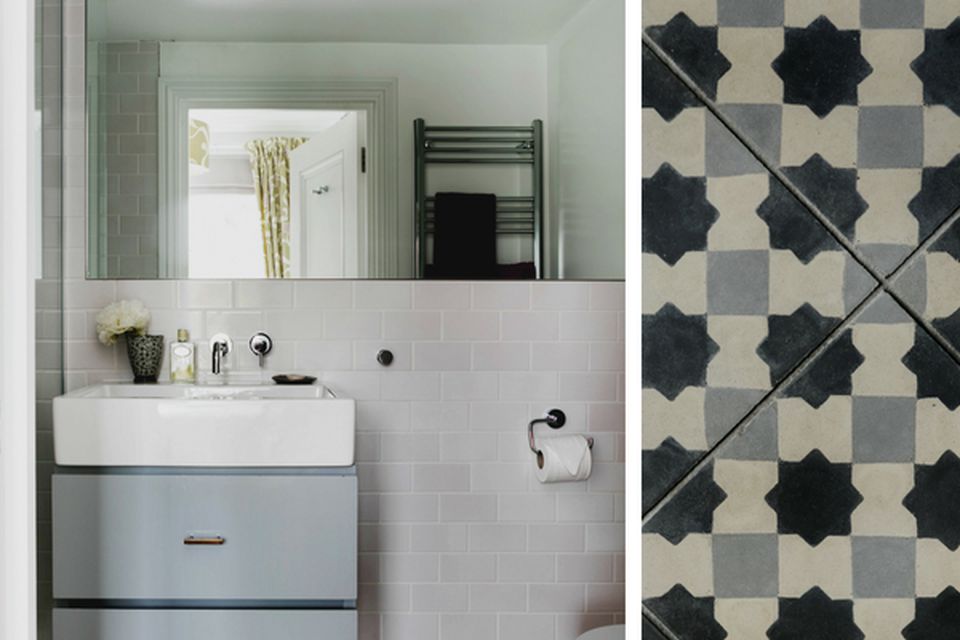 So as a Homewings Designer, what is one of her secret destinations for sourcing? “Sunbury Antiques Market in Kempton Park, just outside London” she says enthusiastically. It’s full of beautiful vintage finds - and it’s massive!” Sidika can be found there regularly scouting for treasures for clients on the two Tuesdays a month that it’s open.

How the Designer Lives: with Sarah Sheikh

How the Designer Lives with Olga Jarvis

At Home With: Olivia Bossert